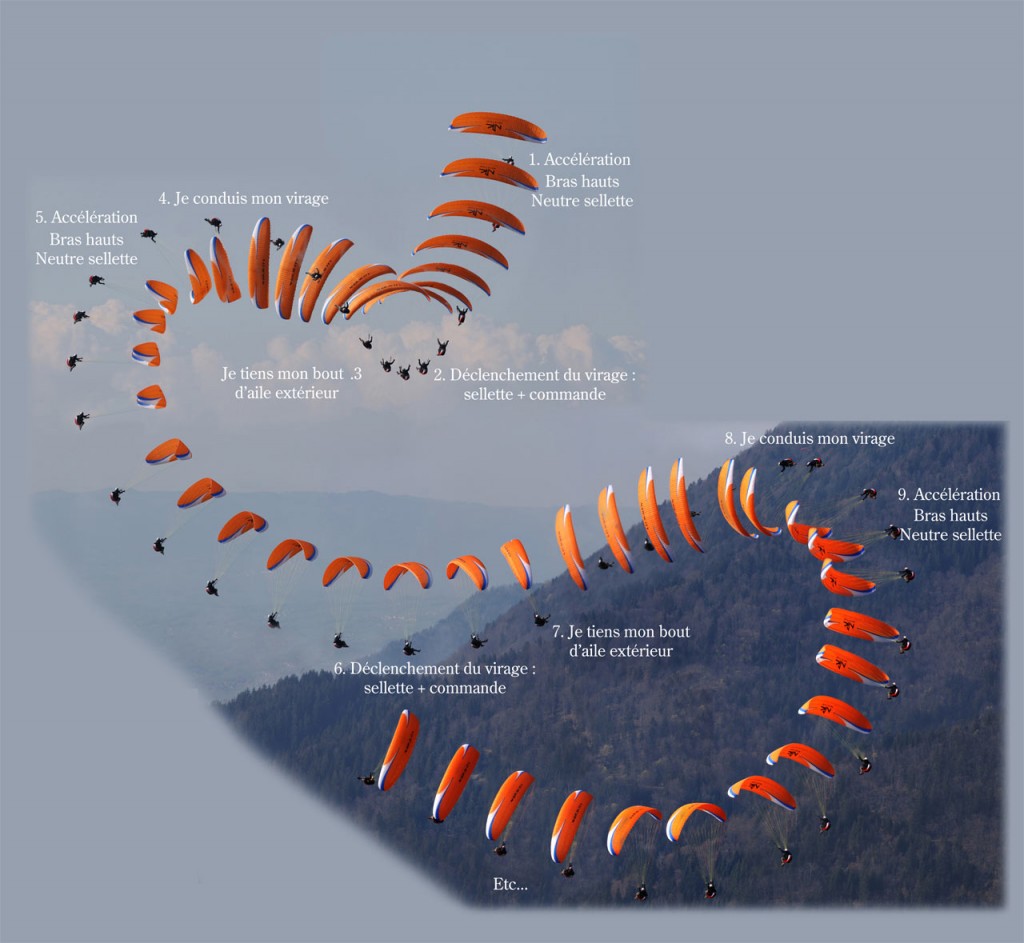 – Open your chest strap as much as possible to allow for good weight shift.
– Make sure that you are flying over water and have a serviceable reserve parachute.

– Initiate a quick turn to left weight shifting and braking left.
– After you dive, release the brakes, lean right and pull the right brake when you are at the lowest point.
– Now the glider leans the other direction, you swing upwards and the glider will be out in front of you.
– Brake paragliding both sides at the highest point to prevent the closure of the upper side of the wing.
* Once you plunge, release the brake, lean left in the harness and pull the left brake to the lowest point.
Remember to stop when you are at the top (point of death)! You will get higher and higher by continuing the movement.

* Finish your turns (turns made over 180 degrees) to make movements that resemble the “8” from above rather than “S”.
If your technique is correct and that you have enough energy, you will not have to stop the glider at the highest point, as in a looping well done.
Note that does not have to make this stop, you’ll need a very dynamic glider and good technique.
* To return to setup Wing-over more quickly, start with a little spin.
Strongly and quickly pull on a brake to the beginning of a spin. After a shift from 45 to 90 degrees, release the brake and check the following surge.
You then pick up speed in returning under sail and you can use this energy to reach the level of sailing (or almost) during the next turn.
Do not try this before mastering the art “normal” and tendrils .

* You should gradually dissipate energy.
The easiest way and safest way is to get out by one or two full turns (of 360).
If you do not control the spiral dive, choose the other option: Decrease the amplitude of the Wing-overs with less weight shifting and braking less until you can not swing more.

* If you do not brake (or not enough) the glider at the highest point, you can have enormous and dynamic closures on the upper side (risk of major ties, twist elevators etc.).
* Early start on weight shifting just after the highest point and pull the brake before the lowest point. By doing this your Wing-over is not very high but it will be more vibrant and safer.
When you are confident you can pull more and later to increase the amplitude of the bends.
Be careful if you start to slow after the lowest point, the next turn might be very high, you could lose a lot of energy and there would be a great risk of having a big collapse when the wing is considered as the roll axis (and after you fall near the sail!).
If you feel that this will happen (when you brake too much and the lines are starting to not be tense) much pull the brakes until you start to get back under sail (the brake pressure will be very slight) to prevent the closure or at least mitigate the consequences thereof.